Zombicide: Chronicles is a stand-alone roleplaying game set in the famous setting of the Zombicide board games. Take a deep dive into this rich universe, create your own Survivor from scratch (or use a ready-to-play one!), and prepare yourself for the end of the world.

But this isn’t your everyday nightmare about the Zombie apocalypse. In Zombicide: Chronicles, you show the undead that the living are still trying to fight back, and you got plenty of guns and willpower to prove it!

This book gives you the main rules and Mission types to live your own Zombicide adventure. With quick and easy mechanics, and gameplay that that can be enhanced by the use of the Zombicide board game miniatures and components, you and your friends will soon be facing entire Zombie Hordes, meeting interesting characters, and exploring a huge metropolis with 10 different areas and unlimited opportunities to keep hope alive and the dead truly dead this time.

Now, it’s time to ask yourself…

What will your survivor story be?

Dive Into the World of Zombicide Like Never Before

There’s a zombie plague overrunning the world. The recently-dead are roaming around, hunting the living, ready to tear them apart on sight. Some survivors chose to hide away in bunkers or caves, but that’s not you. You’re going to attack these zombies head on. You’re going to commit Zombicide.

There’s a zombie plague overrunning the world. The recently dead are roaming around, hunting the living, ready to tear them apart on sight. Some survivors chose to hide away in bunkers or caves, but that’s not you. You’re going to attack these zombies head on. You’re going to co

Zombicide: Chronicles was created by the designers behind the acclaimed The One Ring RPG, in collaboration with Need Games, and challenges players to work together, trust one another, and form strategies to fight the zombies if they want to stay alive.

Famous features of the Zombicide board game are now a part of Zombicide: Chronicles as well. Fight even after death as a Zombivor, meet new Companions that will certainly help you in your Missions, find new Vehicles around the City, and fight your way through crowds of Very Infected People.

Improve your story with a new Mission Generator and keep your friends safe with additional Shelter Rules. Travel Events will take you from one place to the next, and the Rumors you hear from time to time will give you reasons to keep on going.

The world might be ending, but your Survivor‘s adventure is just about to start.

The One Ring Supplement

“He is one of the wandering folk — Rangers we call them.
He seldom talks: not but what he can tell a rare tale when
he has the mind. He disappears for a month, or a year,
and then he pops up again. What his right name is, I’ve never
heard: but he’s known around here as Strider.”

Strider Mode presents additional and modifed rules to facilitate solo play in The One Ring™, as well as guidelines and tips for solo players and a selection of random tables to help incite and inspire your lone wanderings across Middle-earth. 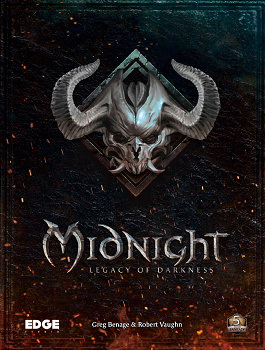 A century has passed since the Shadow fell.

A hundred years ago, the forces of darkness swept in from the north. They crushed the free cities of the humans, drove the elves deep into the forests, and besieged the dwarves in their mountain strongholds. Now the corrupt lieutenants of a dark god rule the broken kingdoms with an iron fist and hunt down the few brave men who still stand against the barbarism consuming their world.

Midnight allows you to take on the role of brave heroes fighting against a relentless evil. Based on the 5th Edition System Reference Document published by Wizards of the Coast® under the terms of the Open Game License, this book is fully compatible with 5th Edition. Create a character from the diverse elven, human, dwarf, halfling, gnome, and orc cultures of Eredan, choose a heroic path that will make you a legend, and go to war against the sinister legions of Izrador and his legates!

The Silver Road is an experimental, minimalist story-telling game for 3 to 5 players, written by Jon Hodgson (Writer on The One Ring, Adventures in Middle-earth, BEOWULF Age of Heroes and The Terminator RPG)  and illustrated by Mike Franchina (Magic the Gathering, Blizzard).

The book is 24 pages long, and each page features a beautiful and curious AI-generated illustration, curated and driven by Mike Franchina (Magic the Gathering, Blizzard)

To play you’ll need this book, one six-sided dice each and pencil and paper.

You’ll bring your own setting, although an example adventure and two sets of example characters are included.

When Sea Is Calling

When Sea Is Calling is a handbook for adventures at sea.

It has everything you will need to start your journey as a sailor (generators, maps, tables, monsters and more!).

This book is 56 pages long (with 4 pages intentionally left blank for formatting purposes) and is full of color vector illustrations.

Please note:  Some of the links in the post above may be “affiliate links”. This means if you click on the link and purchase the item the author of this post will receive an affiliate commission.