Welcome back to the Role Playing Games PDF Spotlights column, where we look at some of the PDF’s that have been released in the past week that have caught my eye.

Squeaks in the Deep

“The dogs and cats of the world are not our friends.
They presume we are always guilty of some crime or other, even if this isn’t the case. You’ll have to remember our most important code: look out for ourselves.”

Rats and mice live in the margins of the empires of dogs and cats, with homes that connect to the Underneath — a vast collection of warrens, tunnels, caves, and other hidden places. It is a dangerous place full of unexplained phenomena and terrifying creatures. But it is also full of wonders of ages past and the thrill of discovery. For the rodents believe Man was part of something called Science, a way to learn power through study, observation, and experimentation. Perhaps through the exploration of the Underneath, they can rediscover Science. It’s time to listen to the squeaks in the deep.

Squeaks in the Deep is a chronicle sourcebook for both Pugmire and Monarchies of Mau. It’s usable with either game, or as paty of a join experience.

Secrets of Lemuria is a short adventure for The Expanse Roleplaying Game intended for a crew of four to six 1st to 3rd level characters. The characters are hired to escort a journalist to Medina Station meet with a scientist who claims to have made a remarkable discovery on a world called Lemuria. Upon arrival at Medina, the crew learn that the scientist has been abducted. Who took her, and what are their plans for her? The crew must search Medina station in the hopes of finding her before its too late. This adventure works well as a one-shot or can easily be inserted into an existing campaign. 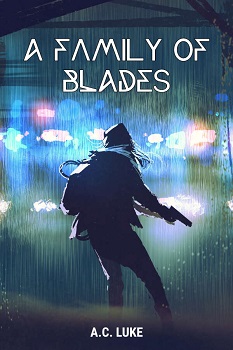 A Family of Blades

Welcome to the Family…

A Family of Blades is a tabletop roleplaying game about a team of criminals who became a family, broke up, and have now been thrust back together for one last job.

Powered by the Forged in the Dark engine, A Family of Blades has been written with an emphasis on fast-paced one-shots and episodic gameplay. Inside you’ll find all the rules you need to play games inspired by the likes of Leverage, Burn Notice, Ocean’s Eleven, and the Fast & Furious movies.

The Sci-Fi Evolution of the Ironsworn RPG is Here!

In Ironsworn: Starforged, you are a spaceborne hero sworn to undertake perilous quests. You will explore uncharted space, unravel the secrets of a mysterious galaxy, and build bonds with those you meet on your travels. Most importantly, you will swear iron vows and see them fulfilled—no matter the cost.

Starforged is a standalone follow-up to the Ironsworn tabletop roleplaying game. Experience with Ironsworn is not required. Starforged builds on Ironsworn’s award-winning innovations (including its famed solo play!) to chart a path into an exciting new frontier.

About the Starforged Digital Edition

The Starforged Digital Edition includes everything you need to play.

Pallatia, the Ruler’s Rest, is a dimension of floating isles where those of noble achievements and royal blood spend the afterlife. Eons ago the emperor god Leviatos died and since then his planar home has slowly frayed and weakened, only breaking just now. The long dead kings and empresses that dwell there have slowly gone mad in the absence of their deity, and the broken energies sustaining their home are trapping dimensional travelers—and worse. Things from beyond and below have begun to invade Pallatia, hastening its end and the total destruction of any soul within.

The future isn’t what it used to be.

Cyberpunk has been one of the most popular genres across multiple media for nearly 40 years. Nuclear war anxiety has transformed into a grim awareness of a collapsing global ecology, carbon fiber has replaced steel in new machines, and cyberpunk has changed too, forging new futures out of rising digital culture and scientific advancements that challenge our very sense of self. The Modern AGE Cyberpunk Slice gives Modern AGE Game Masters the power to code their own cyberpunk-genre settings, inspired by the cutting edge, 80s nostalgia, and everything in between.

Having received intelligence from its Maquis allies in Southern France, Section M drops a team of agents into Vichy-controlled Marseille in the summer of 1941 to disrupt a powerful Black Sun ritual linked to the Dreamlands.

While the mission is a success, at least partially, the agents suddenly find their Resistance contact gone, their escape route compromised, and themselves stranded in night time Marseille with Vichy forces on the alert and Black Sun hunters on their tail.

But that is not their only problem, as things take a decided turn for the weird as they are dogged by strange phenomena and bizarre incidents which transport them from Marseille’s mean streets into a number of surreal hallucinogenic encounters.

Are these incidents real or just hallucinations brought on by some afterimage of the ritual?

And can the agents find a way to shake off these supernatural encounters, escape the Black Sun’s pursuit and cut a deal with the Marseille mob to escape from occupied France before dawn breaks?

Find out in this latest thrilling mission for Achtung! Cthulhu 2d20!

Violet Sky is a post-apocalyptic tRPG set in the far future, where humanity won the war against their alien creators. After the destruction of the reptide planet, magic has been released to the world, all governments have fallen, the sky turned violet and strange lifeforms appeared everywhere. Now our planet is a harsh wasteland ruled by techno-barbarians, self-proclaimed saviors, and powerful tyrants.

Game inspired by classics like the Wasteland video game series, Mad Max and a bit of Fist of the Northstar.

Players take the role of autonomos – free people, that live in the wastelands of the Ruined Europe. You may be a delivery driver that transports water between settlements, a wandering barbarian sellsword with a rusty minigun, or a powerful human warlock, who wishes to build his or her empire.

Violet Sky is a traditional pen-and-paper Role-Playing Game. There is no concrete destiny, the autonomos have to fulfill. You may play action-packed one-shot adventures, long campaigns where the players simply live in the world however they want, or a long “from zero to hero” story.

Violet Sky uses a set of d20, d6 and d4. The game rules are based on roll-under d20 checks, where the higher you roll (and still succeed) the better. The game uses also invention and desperation tokens, which you flip to help your allies or to activate powerful tricks of your character.

The combat in Violet Sky is heavy on tactics, and it is advised to use (cool looking) battle maps. The core rulebook also has rules for crafting, tuning vehicles, magic and other fun stuff you can do in the wastelands.

Please note:  Some of the links in the post above may be “affiliate links”. This means if you click on the link and purchase the item the author of this post will receive an affiliate commission.